Bollywood ‘Singham’ came to the workers to help

Corona infection is increasing day by day, the government has put a lockdown on. All other cinematic transactions have been halted, along with other areas. The film industry is also hit hard due to filming. There is a question about the bread of workers working behind the scenes. 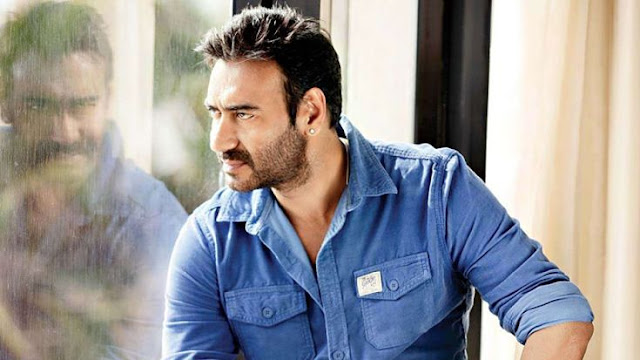 Many Bollywood actors are lending a helping hand to these workers.

Now Bollywood’s ‘Singham’ Ajay Devgn has rushed to help the workers. He has handed over a check of Rs 1 lakh to the Federation of Workers’ Union.

There are a large number of workers working behind the scenes in Hindi cinema. These workers work for small and large screens. They are paid daily. Only with the money they earn is their house spent. Since the filming has been stopped for almost a month or more, a great financial crisis has come upon them. It is now difficult to keep up with the expenses of their family. Therefore, many artistes from Hindi cinema have rushed like God for them. Many artist congregations are now helping these workers with their fair share.

Director Rohit Shetty, actor Salman Khan and others have helped him.

Ashok Pandit tweeted, ‘We are very thankful to Ajay Devgn. He has given Rs 5 lakh for the workers.

Every time Ajay Devgn is there to help. He always comes to the aid of the workers in times of crisis. In fact, he is Bollywood’s “Singham”. Other artists are going to help with this. Now is the time to stand firm and support the workers.

KKR also financed in the fight against Corona, deposited the amount in PM National Relief Fund 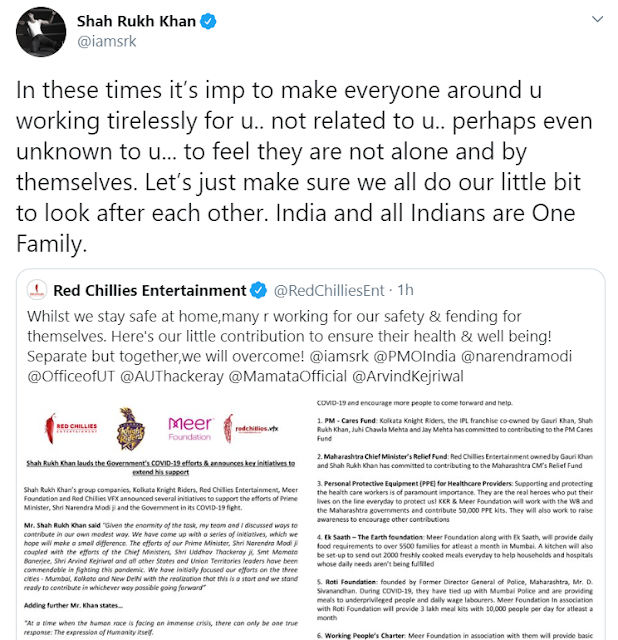 Kolkata Knight Riders also gave this information on Twitter. The team wrote, “In such a situation when we are all safe in our homes, there are many people who are working for our safety. It is our small contribution to keep them healthy. Together they can fight this disease Huh.” 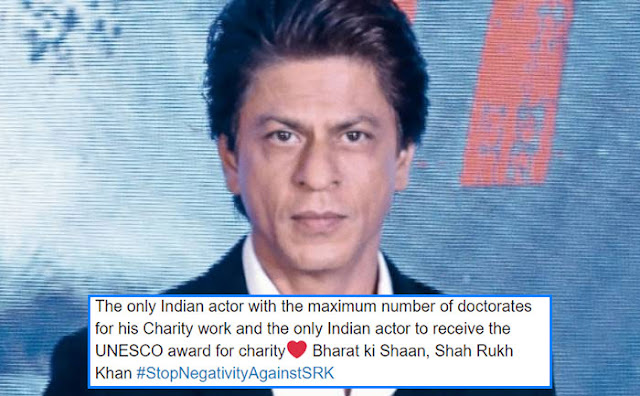 IPL is postponed until April 15 due to Corona

Let us tell you that the 13th season of IPL has also been affected due to Corona virus. The tournament, which starts from March 29, has been postponed until April 15. According to the present situation, it is very difficult to organize the IPL even after April 15.

Know How King Khan is going to Help:


2. Red Chillies Entertainment, owned by Shah Rukh Khan and Gauri Khan, has said that it will contribute to Maharashtra Chief Minister’s Relief Fund.


3. The Mir Foundation and Kolkata Knight Riders will work closely with the Government of West Bengal and Maharashtra and offer 3,000 Personal Positive Equipment (PPE).


4. Mir Foundation, together with The Earth Foundation, will provide free food items to at least one month of food to more than 5,600 families in Mumbai. A kitchen has also been provided which will deliver 2 fresh food packets daily at home and hospital.


5. The Mir Foundation, together with the Roti Foundation, will provide meals to the destitute and day-to-day laborers who are facing difficulties due to the virus.


6. Together with the Working People Charter, Shah Rukh Mir’s Foundation will provide at least one month’s worth of essential items and groceries for the workers earning 3 days recognized in Delhi.

In this statement, Shah Rukh Khan has said, “This is a start and all the members of the company will continue to strive for this kind of work. We will do our utmost to fulfill whatever kind of need we have in India.”

The sequel of Ajay Devgan…

Irrfan Khan left behind so…